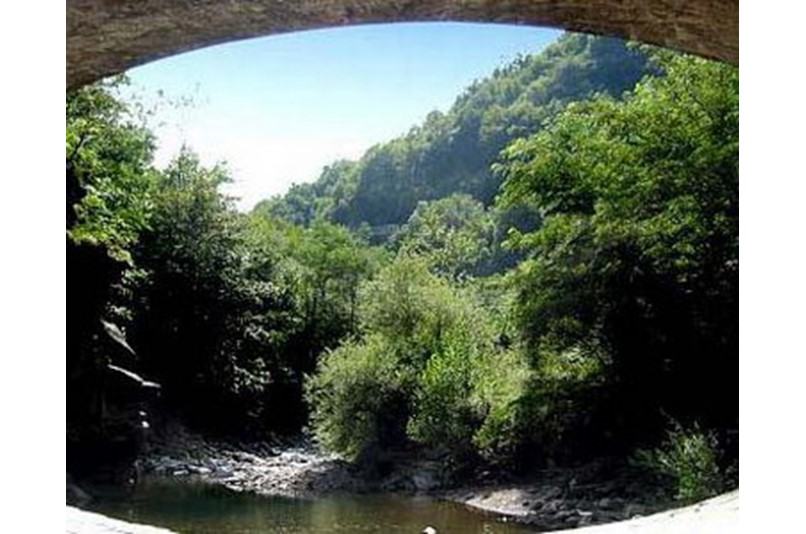 The Rhine River was born in Prunetta on Mountain Pistoiese, 958 m Asl This first part of the life of the river is characterized by numerous waterfalls and a strong erosive action by the water, that this will dig its bed and form the valley. The river has a very strong current, and also the transportation of boulders and debris is a phenomenon geomorphologic very important, as is the storage of materials transported. This phenomenon, however, the youth section is very small, because the river is relatively stable and the slope is modest. At the ages of the river are witnessing the formation of meandering trends serpentiformi water with a strong erosive power on the outside of the bed, and storage on the inside. From this stretch on, the most important are those of warehousing and transportation, because as we get closer to the mouth, the strength and speed of water decreases, with a consequent reduction in the erosive power. The stretch of up to the Adriatic Sea outlet is characterized by the formation of cumoli of sand and clay, transported in the vicinity of the mouth where the strength of the river is practically nothing and the phenomenon of transportation is non-existent. The Rhine Valley has been inhabited since prehistoric times, as evidenced by some findings of tips of arrows and various tools near Marzabotto. The settlements were the most important ones Etruscans, who left traces of their presence obvious. A Marzabotto was also created the National Etruscan Museum and are in the Corsican city of excavations to Misa, which was founded when the outlets were opened on the Adriatic Sea, and was used as a manufacturing center and carovaniero. The bottom instead, it was colonized by the Romany, who settled in urban agglomerations connected by a network of roads minors. The most important is the colonization Roman aqueduct built during the reign of Augustus, restored the last century, is partially used today. During the medieval period these areas were characterized by continuous struggle for the command of the various villages and castles until they were subject to the power of the Counts of Panic who disappeared around 1400, after two centuries of domination. This was the birthplace of Commons, which mostly dependeria parish of St. Lorenzo Panic, which today remains very little. In 1800, with the strengthening of communication network, began depopulation of the mountains, the people preferred to live downstream. It was built today Porrettana, Via Leopolda and between 1862 and 1864 was caused by the railway line-Bologna Pistoia. During the Second World War, these areas were the scene of many struggles, given their strategic importance. The bloodiest episode concerns the withdrawal of German troops, which arretrarono the first line of defense to Monte Sole, wiping during the flight, the civilian population, accusandola of favoreggiare the partisan brigades. The surrounding areas were mined, bombed, and the few survivors all'eccidio were forced to leave the mountains, even after the end of the conflict few people returned to old homes, which in the meantime had been completely destroyed.